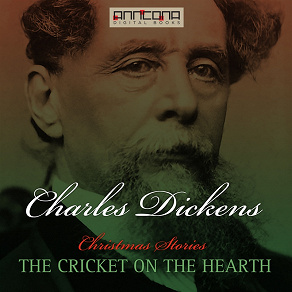 The Cricket on the Hearth

The Cricket on the Hearth: A Fairy Tale of Home is a novella by Charles Dickens, published in 1845. Like all of Dickens's Christmas books, it was published in book form, not as a serial. Dickens described the novel as "quiet and domestic [...] innocent and pretty." It is subdivided into chapters called "Chirps", similar to the "Quarters" of The Chimes or the "Staves" of A Christmas Carol. It is the third of Dickens's five Christmas books, preceded by A Christmas Carol (1843) and The Chimes (1844), and followed by The Battle of Life (1846) and The Haunted Man and the Ghost's Bargain (1848).

Peerybingle, a carrier, lives with his young wife Dot, their baby boy and their nanny Tilly Slowboy. A cricket chirps on the hearth and acts as a guardian angel to the family. One day a mysterious elderly stranger comes to visit and takes up lodging at Peerybingle's house for a few days.

The life of the Peerybingles intersects with that of Caleb Plummer, a poor toymaker employed by the miser Mr. Tackleton. Caleb has a blind daughter Bertha, and a son Edward, who travelled to South America and is thought to be dead…

It has been dramatised in numerous languages and for years was more popular on stage than A Christmas Carol. The book was a huge commercial success, quickly going through two editions.

Charles Dickens (1812-1870) was an English writer and social critic. He created some of the world's most memorable fictional characters and is generally regarded as the greatest novelist of the Victorian period. During his life, his works enjoyed unprecedented fame, and by the twentieth century his literary genius was broadly acknowledged by critics and scholars. His novels and short stories continue to be widely popular. Dickens was regarded as the literary colossus of his age. His 1843 novella, A Christmas Carol, is one of the most influential works ever written, and it remains popular and continues to inspire adaptations in every artistic genre. Set in London and Paris, his 1859 novel, A Tale of Two Cities, is the best selling novel of all time. His creative genius has been praised by fellow writers—from Leo Tolstoy to George Orwell and G. K. Chesterton - for its realism, comedy, prose style, unique characterisations, and social criticism.
Listen to sample
Log in to borrow