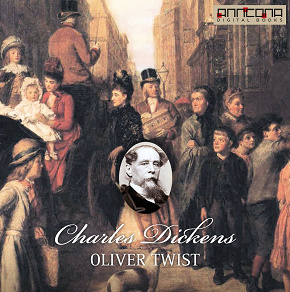 by Charles Dickens
Oliver Twist, is the second novel by Charles Dickens, published by Richard Bentley in 1838. The story is about an orphan, Oliver Twist, who endures a miserable existence in a workhouse and then is placed with an undertaker. He escapes and travels to London where he meets the Artful Dodger, leader of a gang of juvenile pickpockets. Naively unaware of their unlawful activities, Oliver is led to the lair of their elderly criminal trainer Fagin.
Oliver Twist is notable for Dickens' unromantic portrayal of criminals and their sordid lives. The book exposed the cruel treatment of many a waif-child in London, which increased international concern in what is sometimes known as "The Great London Waif Crisis": the large number of orphans in London in the Dickens era.

In Oliver Twist, Dickens mixes grim realism with merciless satire to describe the effects of industrialism on 19th-century England and to criticise the harsh new Poor Laws. Oliver, an innocent child, is trapped in a world where his only options seem to be the workhouse, Fagin's gang, a prison, or an early grave. From this unpromising industrial/institutional setting, however, a fairy tale also emerges. In the midst of corruption and degradation, the essentially passive Oliver remains pure-hearted; he steers away from evil when those around him give in to it, and in proper fairy-tale fashion, he eventually receives his reward, leaving for a peaceful life in the country, surrounded by kind friends. On the way to this happy ending, Dickens explores the kind of life an outcast, orphan boy could expect to lead in 1830s London.

Oliver Twist has been the subject of numerous film and television adaptations, and is the basis for a highly successful musical play and the multiple Academy Award winning 1968 motion picture made from it.